This skirt ain't gonna make itself. . .

I made a claim last year that I was going to make a 100-mile skirt. I am going to use the pattern from the Claudia Evilla skirt by Ruth Sorensen. I featured the finished version of my first skirt back in August 2011. It's a great skirt and I love everything about it.

I had a lot of work to do to even get to the spinning stage -- first I had to comb all that nasty alpaca; then I had to get more of it which required asking a friend to return I gift I had given her. Then in another panicked moment of "I don't have enough fibre to make this skirt"  I had to ask another friend to give me her March 2011 fibre club braid.

Then there was the spinning. Here's what I've spun up this far. It may not look like a lot (she writes defensively) but it's spun really fine and it's a lot of yardage. I want to start plying these singles, but I want to be absolutely sure that I have more blue yarn than the grey -- so I"ll make one bobbin of a two-ply blue and grey using every inch of the grey.  Any left over blue will be added to and used to ply with the second grey bobbin.  My plan is to make a 2 x 2 cabled yarn, using blue and grey singles.  I blogged about it in late January, here's the result of my experiments. 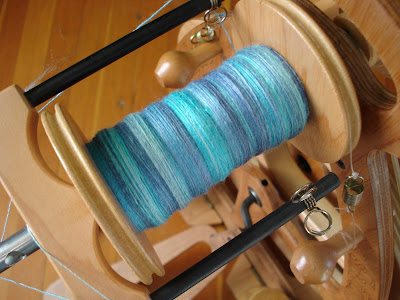 So while I watched the repeat of the Canada/US junior hockey game this morning, I got spinning some more of the blue.  I said a while back this was going to be a spinning marathon, I just have to get down to it, because as I noted in the title of this blog post, this skirt ain't gonna make itself. 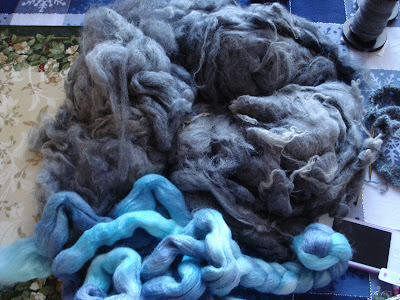 And if, but probably when I run out of yarn, I still have all of this fibre waiting to be processed and spun. This is the only project I am going to do for the next two days. Let's see how far along I get.
Posted by Diana Twiss at 1:39 PM