Who doesn't love the feeling of a just completed project?  Especially when it's an overdue present for someone.

Today while watching the Heritage Classic Hockey Game between Detroit Red Wings and Toronto Maple Leafs I tackled the thumbs. It was tricky picking up the stitches and making sure they lined up with the pattern, so once I did one, I grabbed another set of needles and picked up the stitches on the second mitten. Then I knit the thumbs at the same time. It was a good strategy because once I was done, I was done. I didn't have to go back and do a second thumb.

Here they are before I wove in all the loose ends, washed and blocked them. 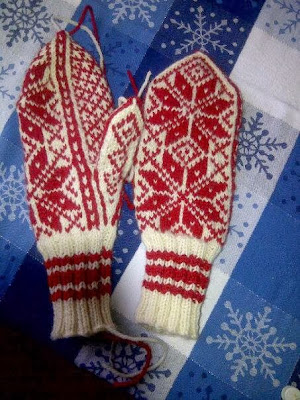 And here's what the inside of stranded mittens looks like. Adds a second layer, thus these are warm mittens. Way more mitten than we need here in the lower mainland of BC, but they are such a great traditional pattern, I had to try them. 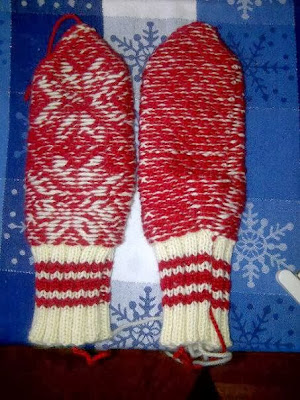