I call this "nasty alpaca" but let me assure you, it has nothing at all to do with the animal, only the fibre.  I never had the pleasure of meeting the beast, but if I did I would ask him/her why he/she insists on rolling in blackberry brambles.  Those are difficult and painful things to remove from fibre.

Here's the story of it.  At our last guild executive meeting before the summer break, a member of our guild was given a dozen bags of alpaca fibre.  Apparently there was an alpaca enthusiast in her network who finally decided to shear his animals, and when he learned that the fibre was good quality, donated it all to our guild.

I selected a grey fleece -- see below. It's a lovely cool grey that will look fine on its own, but grey fibre dyed is magic.  Tones down the colour and adds a depth that's hard to obtain on white fibre alone.  At least for rookie dyers like me. 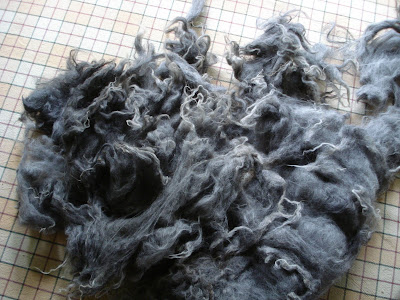 It's a good sized fleece and the staples are long.  Really long -- between 10 and 12 inches.  My first experiments with combing the fibre were so frustrating, I left it in a bag (unwashed) on the backporch.  I deliberately left it right where I would see it every time I walked into the house.  I knew the guilt would build until it became action.  The guilt trip worked -- just in time.  When I finally opened the bag to tackle the fibre, out flew several moths.  If I had left it any longer, those lovelies would have laid eggs and the larvae would have started munching their way through the fibre.

I threw it into a bath of very hot water with Orvus paste.  Let it soak for 1/2 hour and then did that again.  Then I did hot water rinse baths with a bit of white vinegar.  It dried in the sun over two days and then I assessed it.  Much better.  No moths, no more "wet dog/old animal" smell.  Time to tackle this fibre. 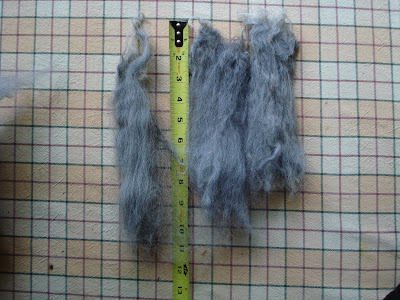 The staples are long, much too long to deal with comfortably.  There is so much debris in this fibre, I decided I needed to comb it with my wool combs.  The debris is what makes this fibre so nasty: pieces of blackberry bramble buried deeply enough that you can't see it until you grab a handle of fibre and stick yourself with it;  some kind of seeds that have nestled themselves deep in the soft down of the fibre; and of course sticks, hay and other mysterious grasses.  No problem, this is a job for wool combs. 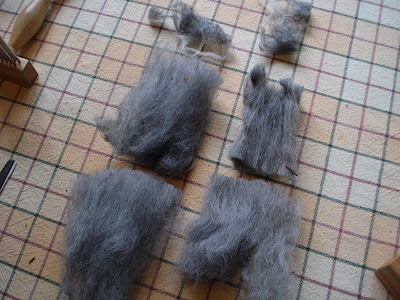 I solved the problem of the length of the staple by cutting it.  I cut off the tips where most of the embedded seeds were and then cut the rest of the staple in half, resulting in a 4 - 5 inch staple.  Quite manageable indeed. 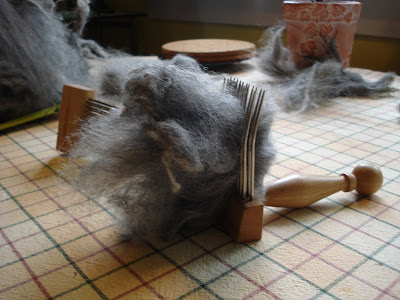 Here it is loaded on the combs. 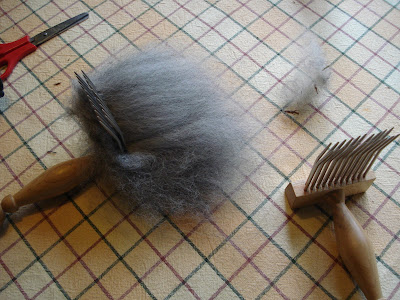 First pass with the comb. 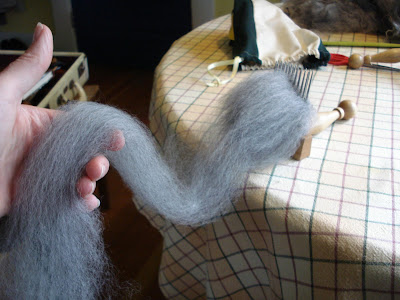 After a couple of passes, it was lovely and clean.  This is it being pulled off the comb. 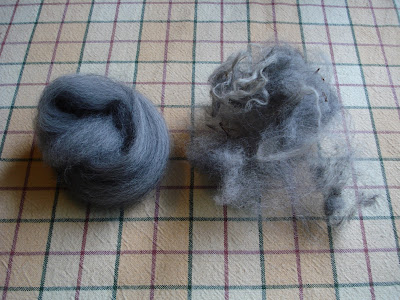 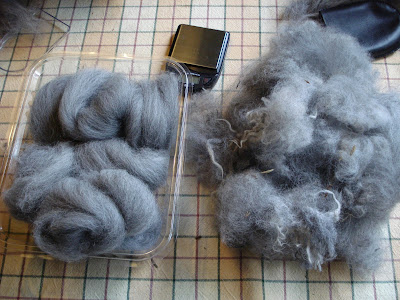 A half hour later -- and not a very effecient one as I did each lock one by one and stopped to do "photo-shoots" -- I had a total of 28.6g (one ounce) of combed, clean fibre ready for spinning.  And 17.6g﻿ of waste fibre.  I also had stab wounds from the brambles and a severe dislike for this nasty fibre.  I will feel differently when I spin it up -- so I won't throw it into the compost quite yet.
We'll see.﻿
Posted by Diana Twiss at 2:39 PM