For my 50th birthday, my husband organized a trip for us to the Taos Wool Festival in Taos, New Mexico.  The gift also included a three day workshop "Spinning for a Purpose" with Abby Franquemont.  He scored big with this gift!

We flew to Albuquerque and drove to Santa Fe right away.  We tooled around the historic plaza area, had a terrific dinner and stayed the night.  The next morning we headed north to Taos, with a stop along the way in Espanola to rent a spinning wheel for the workshop. We took the scenic route to Taos which took us along winding mountain roads.  In the far distance, those are the hills we were heading towards. 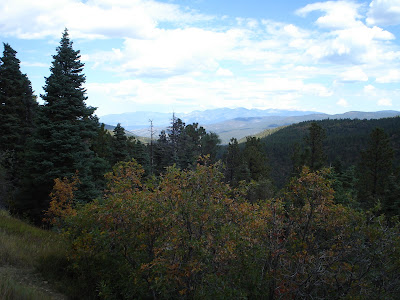 The workshop was three days long, from 9 - 5pm and it was heavenly.  Imagine being in the company of 15 other advanced spinners and headed up by the queen of spinning -- Abby Franquemont.  She is fun, funny, irreverant and very, very smart.  The course was called "Spinning for a Purpose", she called it -- "Being the Boss of Your Yarn."  Here's a shot of the white board on Day 3.  I should have taken a shot of it every day, but alas. 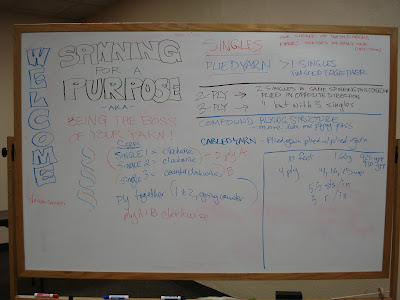 I came back from that workshop newly inspired to make better yarn. I won't be making the same defaut yarn over and over again.  So here's my first project:

I am going to take the "nasty alpaca" from the last post, spin it up and knit myself a Claudia Evilla skirt.  I wore the cotton/linen one I made earlier, to the Taos Wool Festival and it was a hit. In fact, I could very well be responsible for a burst of sales of the pattern.  Ruth Sorensen, you can thank me later.

Before the workshop, I would have just dove into the spinning.  I have an ounce of the alpaca combed up, and I would just start spinning it, and then ply it -- making the same old double ply yarn that I make over and over and over again.  Not this time.

I'm heading downstairs to get working on it.  Will post some shots of the samples tomorrow.  I promise.
Posted by Diana Twiss at 4:03 PM