Felicia Lo at Sweet Georgia Yarns has a Fibre Club.  Once a month, for three months in a row -- you get a braid of wonderfully dyed unspun fibre.  It's a lovely way to experiment with new fibres and new spinning techniques.

Along with the fibre that you get with the club -- approximately 4 oz -- I ordered the additional amount. Which is double.  My thought was that I would experiement with the first braid and then settle in with a well considered spinning approach for the second braid.

Here are the results: 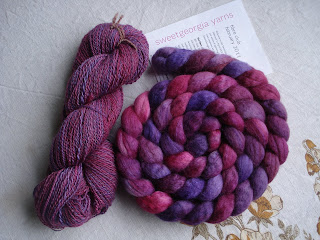 This is the February fibre.  It's called "Sticky Jam". It is 75% Bluefaced Leicester and 25% Tussah Silk.

I spun this very fine on my drop spindle and plyed it on my Ashford Traditional.
This double-ply skein is about 7/8ths of a braid.  So there's more to go. 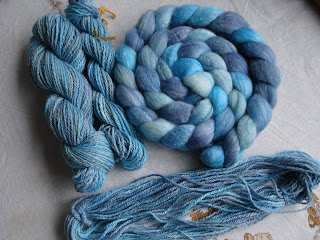 The March fibre is called "Placid Waters".  It is 50% merino wool, 25% bamboo and 25% tussah silk.
Felicia Lo encouraged us to maintain the richness of the colourways by Navajo plying it.  The result is lovely and well advised.

The three skeins are the products of an entire braid. 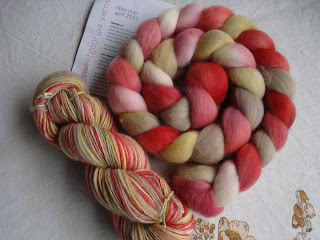 The April fibre is Falkland wool and the colourway is called "Vintage Postcards".  The spinning advice was for spinning a low-twist single.  And the second advice is to spin slubs (a thick and thin yarn).

Haven't yet tried the slubs, but the skein shown is a low twist single.  It's about 2/3rds of a braid.

That was time well spent.

So there's a lot more spinning to do as I takle the second braid in each colourway.  Will try slightly different spinning techniques so I can really explore the fibre.

And of course I signed up for the next Fibre Club - May to July!
Posted by Diana Twiss at 6:57 AM 3 comments:

My UFO's - A Hall of Inspiration

For those of you with Puritan roots, you could see this as a Hall of Shame -- an abundancy of unfinished objects that would have our New England ancestors turning in their graves. But here they are -- seven of them.  [I actually have several a few more unfinished objects, but these are ones that are recognizable as knitted objects.  The others kind of look like swatches and test cases.]

In the midst of pulling them out of their hiding places and posing them for the photo shoots -- I've been re-inspired.  There are several here that I am DEFINITELY going to finish, and one that I am going to rip back and reclaim the needles.

Before you read about them, just look at the photos and see if you can guess which one is toast. 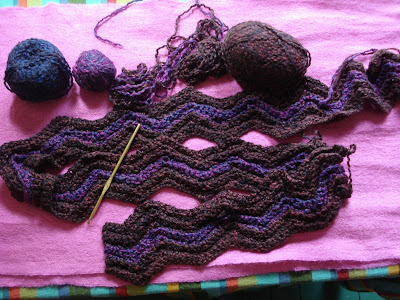 Above:  This is a crocheted scarf -- the yarn is amazingly soft Peruvian Cotton with a very light twist.  It will make a perfect accessory to anything I own for the colours are all mine. I put it down -- years ago -- and everytime I pick it up, I get tripped up because I can't quite remember the pattern.  I will do a row and then the feeling of -- "I'm making a mistake" takes the joy out of it and I put it down.
Below is the Claudia Skirt -- it's only in the unfinsihed pile because I got busy with the spinning workshops and other stuff -- and I am having a hard time deciding how long I want it to be.  Right now it reaches my knees. I am not sure how "inaction" is going to help me decide, but there are many things that can fill my time until I do make the decision.
Additionally, I needed a deadline to complete this and it passed.  So I've created a new one for myself -- the June Guild meeting -- it's going to be a Celebration of our 40th Anniversary as a Guild.  She will get her much overdue debut then. 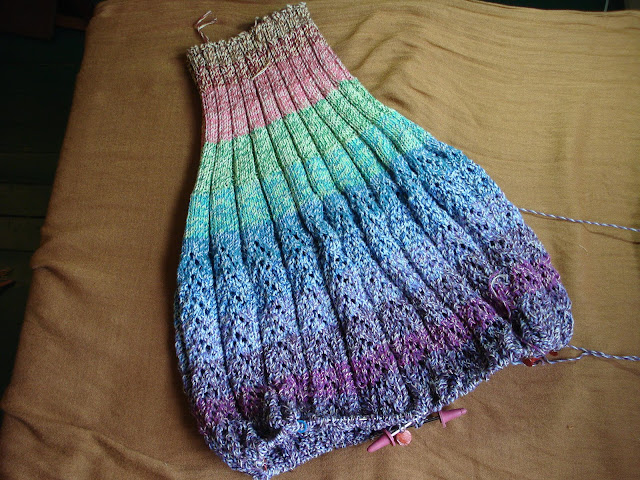 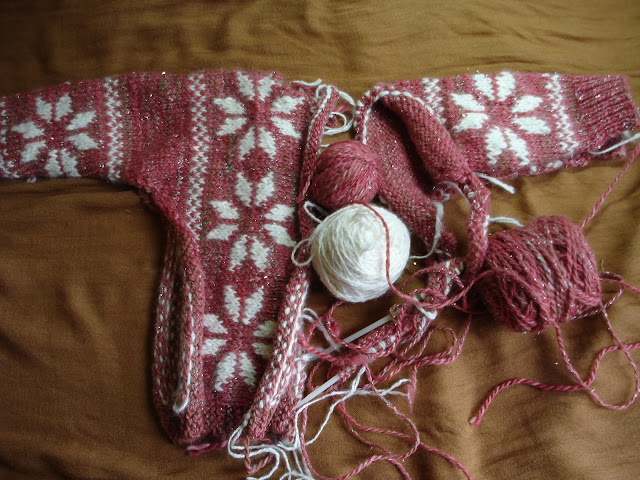 This is a baby sweater.  I started making it for the daughter of a girl friend -- the first grandchild in our midst.  I am shamed to say this little sweetie is now 5.  It's all handspun yarn.  I stopped knitting it because I ran out of the white yarn -- had to order more fibre from the source -- kid mohair and angora -- spun it up, and life got in the way.  ﻿It's a beauty and really deserves to be completed.
Here is the Hall of Solo Socks.  Each one has its own rationalization story.
The pair below: started them with enthusiasm and designed my own pattern for it. It's a cabled leg.  I was so obsessed with making the pattern that I failed to notice that you can't even see the cable work because of the variagated yarn.  So I stopped.  Started again half a year later when I realized that I could over-dye it an bring out the cable work.  Then I lost the scrap of paper that I wrote the pattern on and I've had to read it as I go along.  Not a big deal, but not a knitting pleasure. 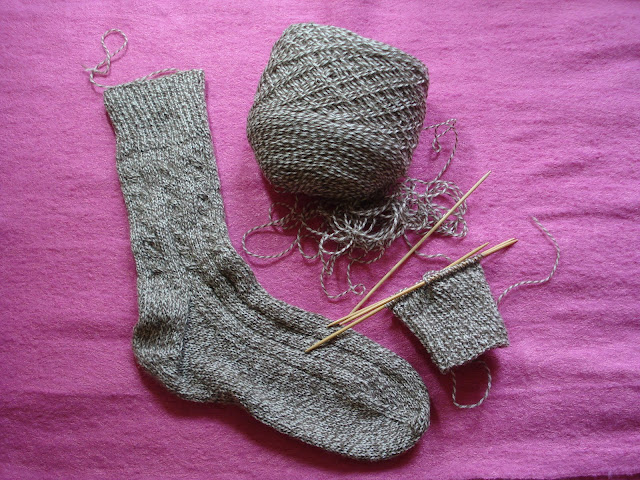 I started making these a while ago and hated the yarn from the moment I cast on.  It is a lightly twisted singles yarn. Here's a tip:  If you hate the yarn at the cast on stage, you are probably going to hate it the rest of the way.  And this one didn't let me down.  I also dislike the length of the colour ways.  It's like it's NEVER, EVER going change colour.  I kept going because. . . .because I wanted to get to the red.  But alas, I got out of the brown, into the green, onto the blue and then the darned GREEN and BROWN stared all over again.  Trying to match these up is going to kill me.  I HATE these socks. 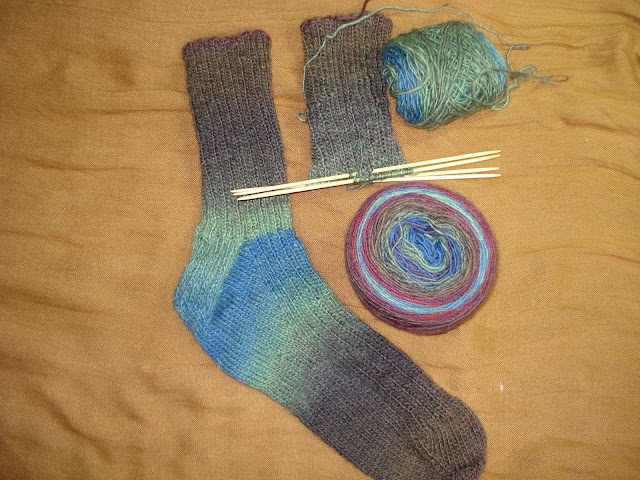 I wrote about this pair in a blog post.  I love the pattern and yarn and the needles I am using to make them.  I only stopped because I had other projects to complete.  I didn't want to have SSS - Second Sock Syndrome, so I made the leg of one, and then started making the leg of the other.  For this pair, it's only a matter of time.  I will probably bring these with me on my next trip to Winnipeg.  Good knitting time on the planes. 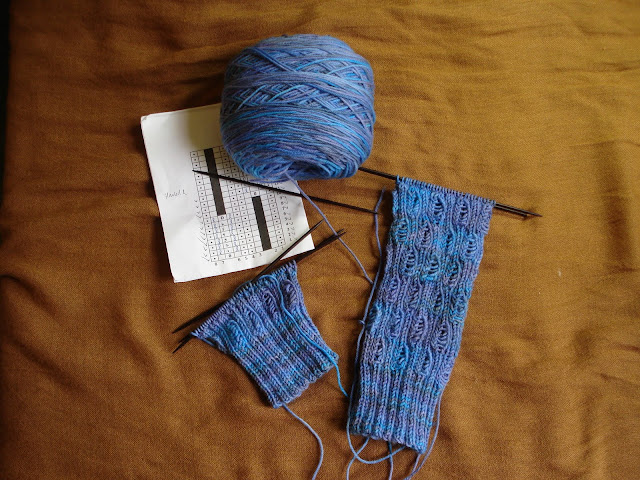 I call these the Dirty Birthday Cake socks.  The yarn has wild birthday type colours that have been muted slightly.  Nothing exciting -- wrote the pattern myself -- like the pair above, it's only a matter of time.  In fact, I started making these on my last trip to Winnipeg.  Socks are good things for the plane. They pack up small and if you have the pattern memorized, you don't have to carry around a pattern book. 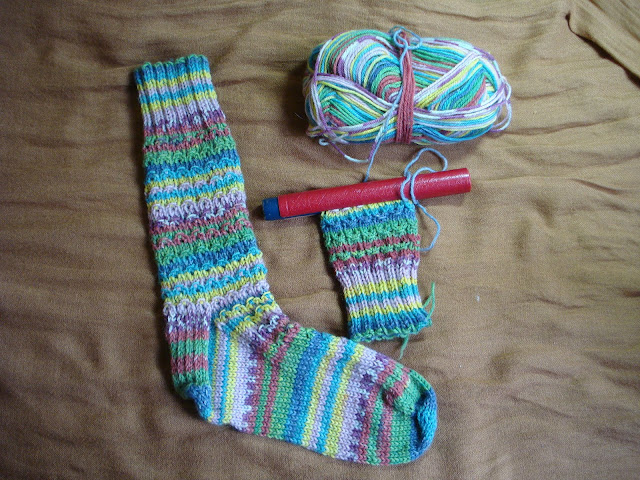 So there are the seven unfinished objects that I am willing at this time to share with you.  The others will stay stashed until I get struck by "finish-i-tis".
Can you guess which one is going to be reclaimed?  Or given away for someone else to complete?
Posted by Diana Twiss at 2:29 PM No comments:

Now that I have an accessible studio, I can waltz in there and work at my pleasure.  So today, a lovely Sunday, that is exactly what I am doing.  I am listening to "Cross Country Check-Up" on Radio One -- of course it's about the election, and combing more of the polwarth fibre for drop spinning. 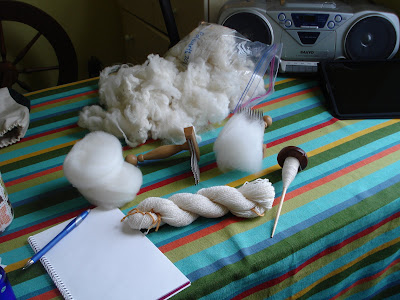 I wrote about the polwarth in a previous blog post.  On all my travels this year, managed to spin up all the fibre I had prepared that weekend.  It is lovely stuff -- so fine and so soft.  You can wear it next to your skin. There were enough combed nests to make two full spindles of finely spun singles.  I wound them into hard balls and plyed them on my spindle. 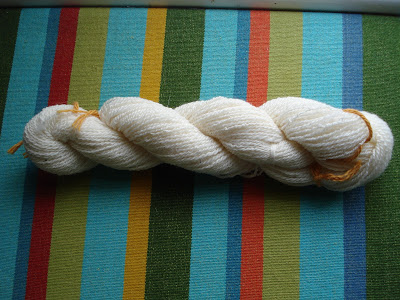 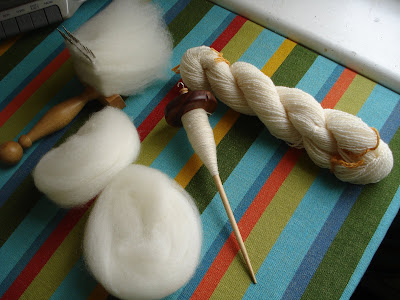 Here's the whole family of activity.  The wool comb is in the top left corner with nicely combed top ready to be pulled into a roving.  A couple of nests, newly made, ready for spinning are in the bottom left.  My Houndesign laceweight spindle with a bit of spinning on it already.  And the first skein.

Back to work and "Cross Country Check-Up".
Posted by Diana Twiss at 2:51 PM No comments:

Studio Clean Up Complete - "Everything in its Place"

It really didn't take that long.  It was mostly a superficial mess.  The stuff filling up the space fell into two clear categories:


So that old saying, "A place for everything and everything in its place" however irritating it may be for some to hear, is an excellent guide when tidying up a room. And here is what it looks like now.  Notice the abundancy of space on the floor and clear space on table surfaces.  Now there is hope that some projects can get started/worked on/completed. 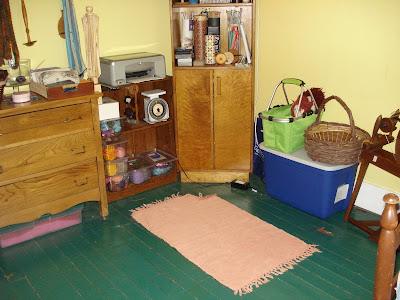 I needed more space to store things, so I removed all the books from the bookshelf -- filling a shelf in the hallway.  Seems a little counter-intuitive to remove books from a bookshelf, but they were books, binders and reports related to my work in adult literacy.  Frankly, they were taking up valuable real estate so out of the studio they went.  Now that space is devoted to things I need handy, but don't want hanging around on the work tables -- the lazy kate, scale, ball winder and fibre in the spinning queue. 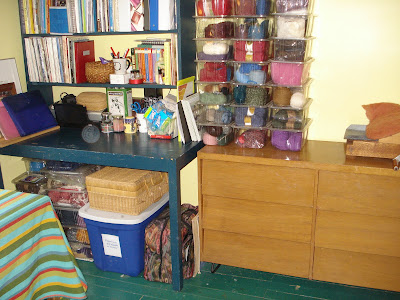 The underside of tables are great places to store bins, boxes and sewing machines.  Again, things that you want to know about -- at a glance -- but don't want getting in the way. The trick is to label things so you don't have to go digging about several bins to find that one bag of blue romney. 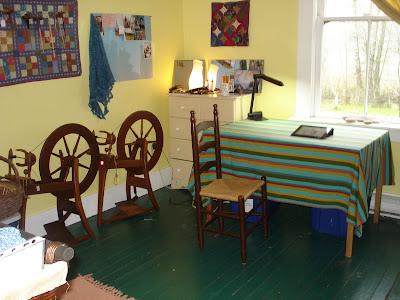 Here's the view from the doorway.  Space to move around in.  Supplies neatly sorted within arm's reach.  Clear work tables.  This is truly a space where things can happen.

Studio Clean Up - "A Place for Everything"

I haven't done much in my studio lately, partly because I've been busy with work -- travelling around, doing presentations and training events.  But the real reason is because it is such a disaster I can't find my way around it. Lately I've gotten into the habit of dashing into the room to grab/find something and mostly leaving without it, 'cause I can't find it, or 'cause I can't stand being there.

I don't exactly remember when it got out of control. I think it was when I was organizing things for the Drop Spindling class I taught at FibresWest.  I pulled a lot of things out of boxes and bins and reorganized them for the workshop, and never got things back to their rightful place.  And then after the event itself -- I scarcely had time to get in the door from that, when I was off to another town to do some literacy work.  There are some boxes I still haven't unpacked from the workshop.

Then I bundled up new boxes and such for the full day demonstrations at the Bradner Flower Show last Saturday.  So the mess got even more messed up.

Now I have to do something about this.  What's the point of having a space to do art if you can't make your way into the room and hate being there?

Here are the boxes and such from the spinning workshop and demonstration. 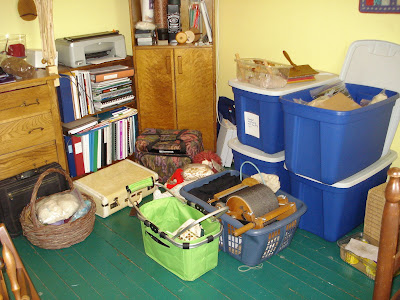 Here's the other side of the room.  I have somehow managed to fill every empty space with some piece of fibre in various stages of production, or a tool or piece of equipment. There's scarcely any room to actually "do art".  Enough. 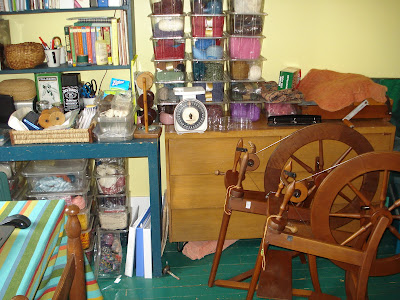 These will stand as "before" shots.  I am going to now leave the computer and set myself to organizing this space so it is a functional studio.  I will post "after" shots tomorrow.

A place for everything, and everything in its place.