It all started in early August.  I wrote about it in Yarn for a new project.  I also shared with you what I thought was a minor disaster, yarn with tons of bits and noils in it. Then, to document the process, I did a quickie post.  So here is a photo shoot of the finished gauntlets.

The pattern for these mitts comes right from Morgan Wolf's Baby Fan Mitts that you can get for free on Ravelry. In an earlier trial run of this project, I tried to figure out how to make the lace wider at the elbow and then slowly narrow down for the wrist.  Everything I came up with, while it looked good, required a great deal of attention and concentration.  Both of which I have very little to spare.

So I tried an old trick that has served me very well many times.  Instead of casting on with 3mm needles like the pattern wanted me to do, I cast on with a 5mm.  After 3 inches of that, I moved down to 4mm.  Three more inches, and then down to the 3mm, which is where you would probably begin the pattern.  And then I was on my way.  Three inches of that and I started the thumb gusset. 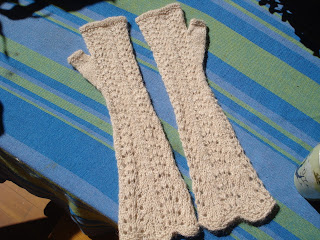 The larger needles at the elbow opened up the lace and made for an airy fabric.  As I moved onto the other needles, especially the 3mm, you can see how the fabric got more dense.

I delivered them to Jenny and they fit her perfectly.  She loves them, which is always a treat for those of us making these items. 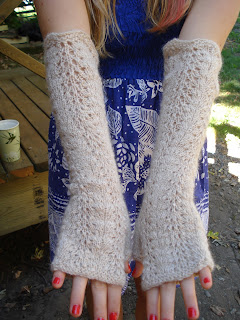 Thanks to my model, our youngest.